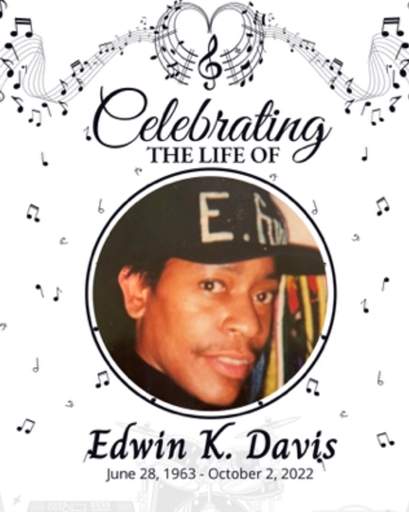 Edwin K. Davis, 59, passed away surrounded by his loving and devoted daughters on October 2, 2022, but his larger-than-life persona and trademark silliness will never be forgotten.

He was born on June 28, 1963, in Akron, Ohio. He was the youngest son of the late Theodore "Ted" Davis and Delores Shelton Davis.

Affectionately known as E-Funk by his family and many friends, he was a "jack of all trades", a tremendous craftsman, but was most notably known for his exceptional ear for music and his mastery of almost every instrument he touched.

He enjoyed old school funk music: Parliament Funkadelic & George Clinton, Bootsie Collins and Roger & Zapp to name a few and was known for his heavy hitting baseline thump. Also known as the Animal Whisperer, he communicated with the local strays that he could effortlessly train into loyal companions. And man, could this dude cook! If you've never had his BBQ, neck-bones or the infamous E-Funk popcorn, you have surely missed some delicious treats.

Along with his father, Ted, he was also preceded in death by his older siblings: Chester Richmond, Sandra Shelton, Robert Shelton and Randall Richmond.

In addition to his mother, Delores and children, he is also survived by brothers: Ted (Alice) Davis, David (Gayle) Davis and Terrence Shelton.

Everyone he encountered has a colorful story or two or three of "that one time when Edwin", which is why he will be greatly missed and fondly remembered by a host of aunts, uncles, nieces, nephews, cousins, neighbors, friends and former band mates.

To order memorial trees or send flowers to the family in memory of Edwin K Davis, please visit our flower store.