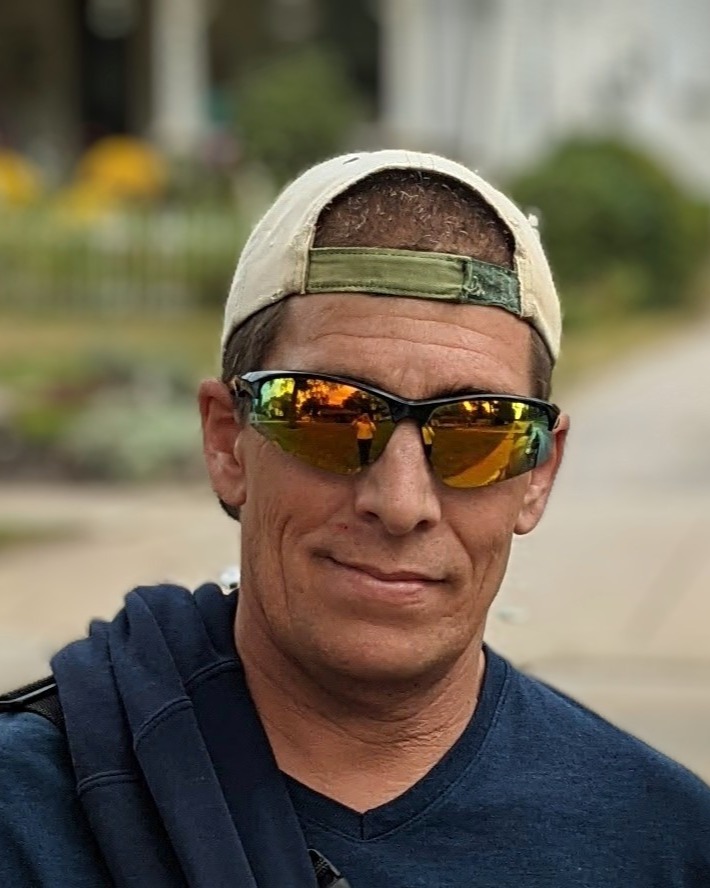 Eric Scott Wuensche, 53, of Akron Ohio, passed away unexpectedly on October 28, 2022, at his home, 1600 Brittain Road Apt. 324. Eric was preceded in death by his brothers George and Ruben; his biological parents, Fred and Meredith Sandals; and his adoptive mother, Bonnie Wuensche. Eric is survived by his father, Jay Wuensche (Elaine) of Lorain Ohio; his sister Erika Ward (Lonny) of Genola, Utah; his sister Mo Lewis of Akron Ohio; and many nephews, nieces, grandnephews and grandnieces.

Eric was born 15 Nov 1968 at St John's Hospital in Lakewood, Cuyahoga County, Ohio to Frederick Sandals and Meredith Frances Franklin. Over the next few years, Eric’s two younger siblings, Maureen and George were born. In July of 1976, the children moved in with the family of Jay and Bonnie Wuensche at 2404 Dover Center Road, Westlake, Ohio.

Erika, who was 6 and had been an only child up until that time, was so excited to have siblings! She remembers making special greeting cards inside plastic mugs, welcoming them to the family. All three children were adopted on 30 November 1976 and sealed for time and eternity in the Washington LDS Temple on 22 November 1977. Life would never be the same for the Wuensches with four busy young children!

In June of 1977, a job transfer for Jay took the family to the Fox Valley area, a far west suburban area of Chicago, Illinois. When they first arrived, the family was waiting for their home to be built, so they moved into the St Charles Ramada Inn, where they lived until the home was finished that fall. The kids had lots of fun living at the hotel, swimming in the pool, riding up and down in the elevator and generally causing chaos.

That fall, Eric started school at McWayne Elementary school on Wilson Street in Batavia. Shortly thereafter, he transferred to Special Education at Alice Gustafson on Carlisle Road. Bonnie drove the kids back and forth in the family’s only car, from the Ramada Inn in St. Charles to their school in Batavia, and dropped Jay off at the train station, to commute every weekday into the city to work at Marshall Field’s computer department in downtown Chicago. Starting in 1981, Eric attended Middle School in Geneva and in 1984 continued in Special Education at St Charles High School.

During this decade from 1977 to 1987, Eric, Mo, Erika and George enjoyed many fun activities: sledding at Fabyan Windmill Park, ice skating or fishing on the Fox River, roller skating at Funway, delivering newspapers, competing in Batavia running club, playing Atari, and swimming nearly every summer day at Quarry Pool. Eric especially liked to jump off of “The Tower” - a high dive that took a lot of bravery to step off of! He was a really good swimmer and was the first of the bunch to pass the “deep water test” - a rite of passage for young Batavians. As kids, Eric and his siblings enjoyed riding bikes around the neighborhood, playing at the park next door, doing dirt bike tricks out at “the mountain”, and playing for hours upon hours in the cornfields.

In 1979, the Wuensches added an older brother to their family when Ruben Garcia came to live with them as a foster child. Eric, George and Ruben shared a room in a unique 3-bunk bed setup that Bonnie designed, and Jay built. The boys enjoyed playing Risk and D&D together and could often be found practicing nun chuck skills and break dancing. These were the early days of MTV, and Eric loved to watch music videos, as well as Chuck Norris, Godzilla and King Kong films. For the longest time, Eric would talk about how he wanted to help someone raise the Titanic when he grew up. Eric liked to write stories, in particular one about a werewolf named "Modock", which he wrote on and off for many years, but never finished.

Writing about Eric, Bonnie Wuensche said: “As a child, Eric was very playful, and one of the hardest workers anyone ever saw. He loved to really dig into a project and was the kid who always did more than his fair share of any job. He moved a truckload of compost around the yard with just a shovel and a wheelbarrow when he was 12, and was sorry to see the pile disappear so fast. Everyone who knew him commented that if he could channel that energy into the right place, that nothing would stop him. Even his psychologist commented that in spite of his handicaps and learning disabilities he had the ‘stuff heroes are made out of’. His life was not without challenges, but he had a cheerful attitude about many things. He loved to tell stories, either fiction or real, and is was always very entertaining around the campfire on scout camping trips. He gave great backrubs.”

After high school, Eric worked for a time as a “carnie” for a local fairground company. He was great at helping setup, tear down, and transport the equipment, and operate the rides for the various county fairs in the area. It was hard work, but Eric never shied away from physically demanding jobs. A few years later, he reconnected with his biological mother, Meredith, and went to live near her in Ohio. He worked a variety of jobs during this time, always physically demanding as before.

Eric has lived in Akron since about 1991, both on his own and with his sister Mo. It was here that he was connected with CSS & his caseworker, Krissy. She was a big part of his life, and very instrumental in helping him get to his appointments, making sure he got what he needed and checking on him regularly.

Eric loved to WALK. He would go through a pair of good tennis shoes in record time, because he just loved to get out and walk and walk. As a result, he developed many friendships over the years. No matter where he went, Eric always ran into someone he knew. His nephew Daniel often mentioned that when he was out driving, he would see Uncle Eric walking again! He always wore his knapsack (which was actually a fanny pack) over his shoulder, and his favorite belt and baseball cap. Eric just loved to walk, and rarely accepted rides. It was only recently that he started to ride the bus, and then only when it was either too hot or cold.

Eric loved to go "curb shopping". As a result of this helped several friends and some family members with things they were in need of, because of his "finds". Eric moved into the Fred W. Nimmer Building in May of 2018, where his infectious smile, attitude & willingness to help anyone didn't go unnoticed. He did help quite a few people in his building who did not have the ability to go to the store on their own. The building manager there told Mo that there will be a void left by Eric’s passing and he will be sorely missed, because of his presence and the fact that he was always willing to help anyone. She said he would come down everyday and say "Hi" to the office staff and asked if they needed help with anything.

He also loved to watch documentaries about historical events, war movies, true crime, and the animal kingdom. Eric loved to watch religious movies and always had great suggestions of things to watch when he was with his family.

Eric was a man full of gratitude. Whenever you took him out to lunch, or had him over for dinner, or gave him a ride, he would thank you profusely, over and over. He especially loved Mexican food & would ALWAYS want to go to Azteca to eat! His 2nd favorite place to eat was any chinese buffet, which he pronounced “Buh-fett."

He was also very helpful and always asking if there was anything he could do to help when you had him around. Eric had a lot of catch phrases that he liked to say. You could pretty much guess how he would respond to certain questions. For example:

Eric’s life was full of challenges, but he met every obstacle head-on. He did his best with what he had been given and the phrase, “bloom where you’re planted” comes to mind when we think of him. He was always looking for someone to help and was well-loved by his family, friends and neighbors. He will be sorely missed, and we are all so grateful that he was a part of our lives. We take comfort in knowing that he is now free from his earthly struggles and finally at peace, safe in the arms of a loving Heavenly Father.

A Celebration of Life Service for Eric will be held at 2pm on Saturday, November 5th, at East Liberty Park, 471 E. Turkey Foot Lake Rd., Green Ohio. A light dinner will follow. The service will be available via Zoom at the following link for those who cannot attend in person. https://us02web.zoom.us/j/81782586316?pwd=bkdkUEJXcEwxZnNUYXlNMk9FMlc3UT09.

Interment will follow at a later date. Thank you to Adams Mason Funeral Home & Crematory 791 E. Market Street Akron Ohio, for helping with arrangements. Memorial donations may be made via Venmo to: Mo Lewis @mobetta2u or Erika Ward @jumbledsunshine. The service will be recorded and can be accessed by contacting Erika Ward at jumbledsunshine@gmail.com.

To order memorial trees or send flowers to the family in memory of Eric Scott Wuensche, please visit our flower store.